Migration to New Worlds: The Century of Immigration concentrates on the period 1800 to 1924 and covers all aspects of the migration experience, from motives and departures to arrival and permanent settlement. To supplement this, the collection includes early material such as the first emigration ‘round robin’ from 1621 and letters from late eighteenth-century merchants and travellers in the United States. Some later material is also available, including ocean liner and immigration depot photographs from the mid-twentieth century.

The collection presents a unique insight into the personal stories of migrants during this period. Letter collections, travel journals, diaries and oral histories provide a wealth of first-hand accounts for research into emigration experiences and the hardship of settlement. These are supplemented by scrapbooks, government papers, hand-drawn maps, watercolours, objects, emigration pamphlets, shipping papers and rare printed material which provide significant context to government legislation, commercial interests and living conditions for migrants during this period.

Migration to New Worlds: The Modern Era begins with the activities of the New Zealand Company during the 1840s and presents thousands of unique original sources focusing on the growth of colonisation companies during the nineteenth century, the activities of immigration and welfare societies, and the plight of refugees and displaced persons throughout the twentieth century as migrants fled their homelands to escape global conflict.

This later chapter of the migration story is brought to life through organisational papers, providing detailed insight into the daily running of services for new immigrants (particularly in the United States); government correspondence and pamphlets encouraging immigration to Australia, New Zealand and Canada; oral histories, objects and accounts documenting key personal reflections on European migration experiences and correspondence, scrapbooks and journals outlining colonisation schemes in New Zealand and the United States.

For further information on collection highlights across both modules of Migration to New Worlds, see below.

Documents digitised in full colour include: 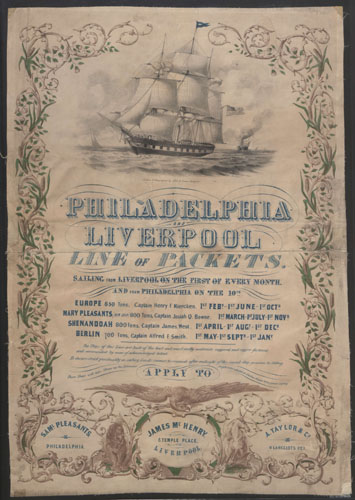 Every care and attention has been paid to preserve the historic authenticity of these documents which range widely in date from the early seventeenth century to the twentieth century. Any terminology that may be deemed discriminatory or offensive by present-day principles may have been preserved for the historic accuracy and relevance to that particular document.

The following are some of the highlights available in Migration to New Worlds:

Sourced from three archives and museums, video and audio oral histories within Migration to New Worlds chart the experiences of migrants arriving in the United States and Canada and the process of permanent settlement.

Interviews from the Tenement Museum describe the experiences of European immigrants living in New York tenement buildings during the early twentieth century. Ex-residents of 97 Orchard Street explain what life was like in the building, the opportunities available for newly arrived immigrant families and the sights, sounds, tastes, smells and community interactions on the busy streets of New York's Lower East Side.

Including war brides, political refugees and displaced persons, oral histories from the Canadian Museum of Immigration at Pier 21 discuss migration experiences and first impressions of Canada.

Founded by Edward Gibbon Wakefield, the New Zealand Company was built on the notion that systemic colonisation in Australasia would reduce rising unemployment and poverty levels amongst the British working classes, whilst meeting demand for agricultural labourers in the colonies.

Significant selections from New Zealand Company Original Correspondence (CO 208) at The National Archives, including the Charter of Incorporation and Colonel Wakefield's Letter Books, chart the creation, administration and eventual dissolution of the New Zealand Company and the organisation of British colonies in New Zealand between 1839-1851. 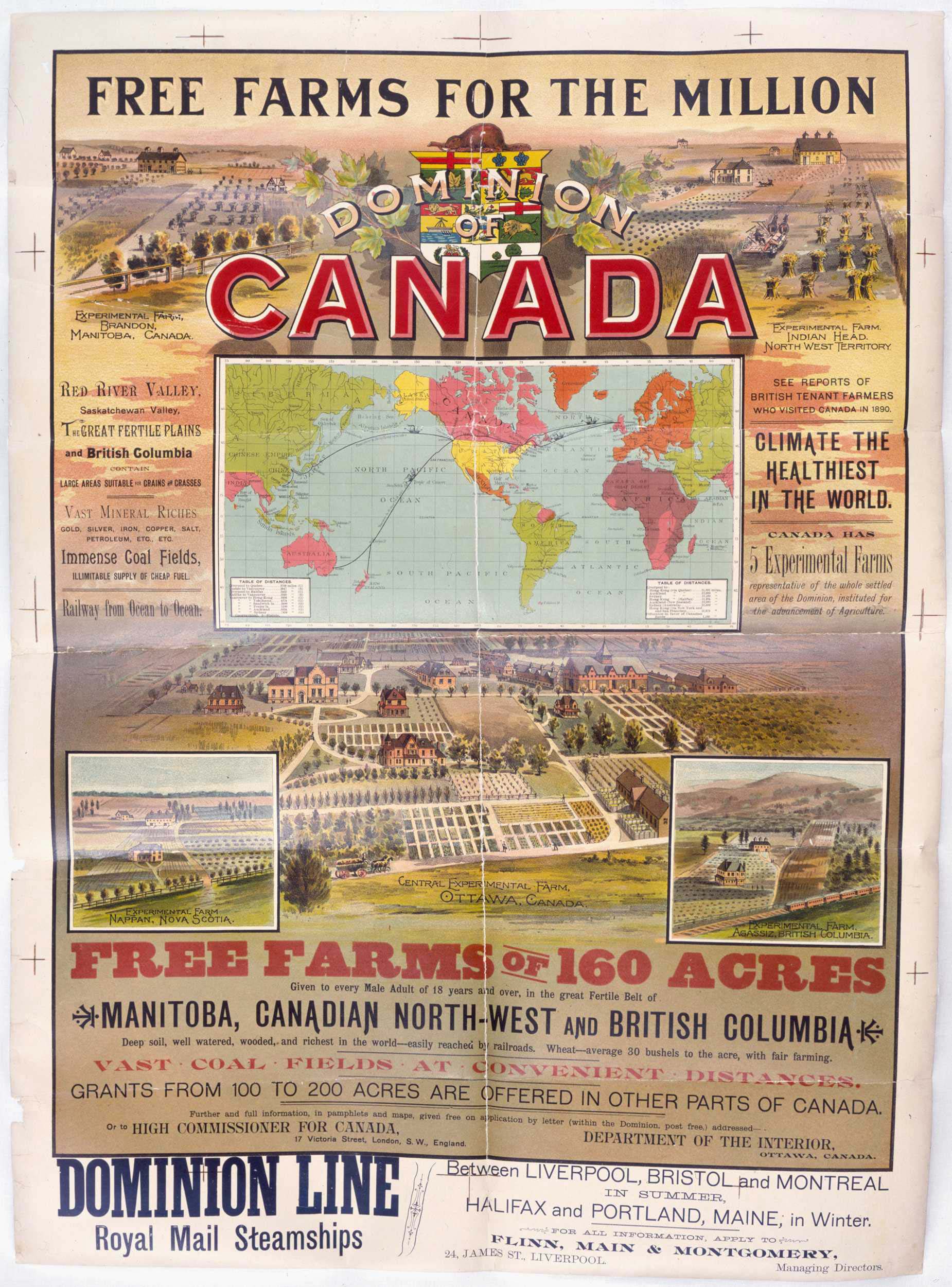 Manuscript diaries and letter collections from Glenbow Museum and The National Archives, shed light on the life of immigrants in Canada and their reasons for emigration; whether prompted by family concerns, business opportunities, religious callings or military postings.

Alexander Begg (1825-1905) came to Ontario in 1846 to teach and in 1872, was appointed Emigration Commissioner in Scotland for the Province of Ontario; persuading thousands of crofters to settle in Canada. His diaries and correspondence record his daily life and official duties, including assisting the Dominion Government to define the Canada-Alaska border.

Sidney Brook (1871-1957) came to Canada in 1891 to become a farmer. His diaries itemise daily tasks, the harsh climate and his part in the First World War.

Sophie Alice Puckette (1885-1971) moved to Alberta from Kansas with her family in late 1903. Her diaries are an unusual example of a female perspective on migration and describe her stay in the Canadian immigration halls, setting up life on a homestead, household activities and her courtship with Jim Miles (1883-1958).

From The National Archives, correspondence between the Colonial Office and Protectors of Immigrants on the supply and management of Indian and Chinese labourers in Africa and the Caribbean are included. Conditions at plantations in Jamaica, Trinidad, the Windward Islands, British Guiana, St Lucia, the Cape of Good Hope, Natal and others are discussed at length.

Papers from the Wied and Solms-Braunfels collections provide the background to the German Emigration Company and the organisation of German settlement in Texas.

Often referred to as the 'Father of Texas', papers from Stephen F. Austin and the Austin Family provide information on the creation and management of the first American settlement in Mexican-held Texas. Items include field note books, recollections of colonists and lists of titles made under the first contract for settling 500 families.

Keeping emigrants healthy from port of departure through to disembarkation was a constant challenge during the nineteenth century. Migration to New Worlds includes the Letter Books of the Medical Officer of Health, 1849-1879 from Liverpool Record Office. Appointed in 1847, correspondence from Dr William Henry Duncan and his successors discuss the measures undertaken to prevent the spread of disease amongst migrants waiting to board shipping at one of Britain's busiest emigration ports.

Papers from the Department of Agriculture, Canada House and the British Overseas Settlement Board at Library and Archives Canada discuss emigration returns of the sick at Grosse Île quarantine station, 1840-1876 and the management of immigration into Canada.

Logbooks from convict ships at The National Archives, such as Lord Raglan, Lincelles, the Anna Maria, Brunswick, Norwood, Ironside and Corona detail the rules on board ship for passengers, rations, religious instruction, education and injuries occurring on route to Australia. 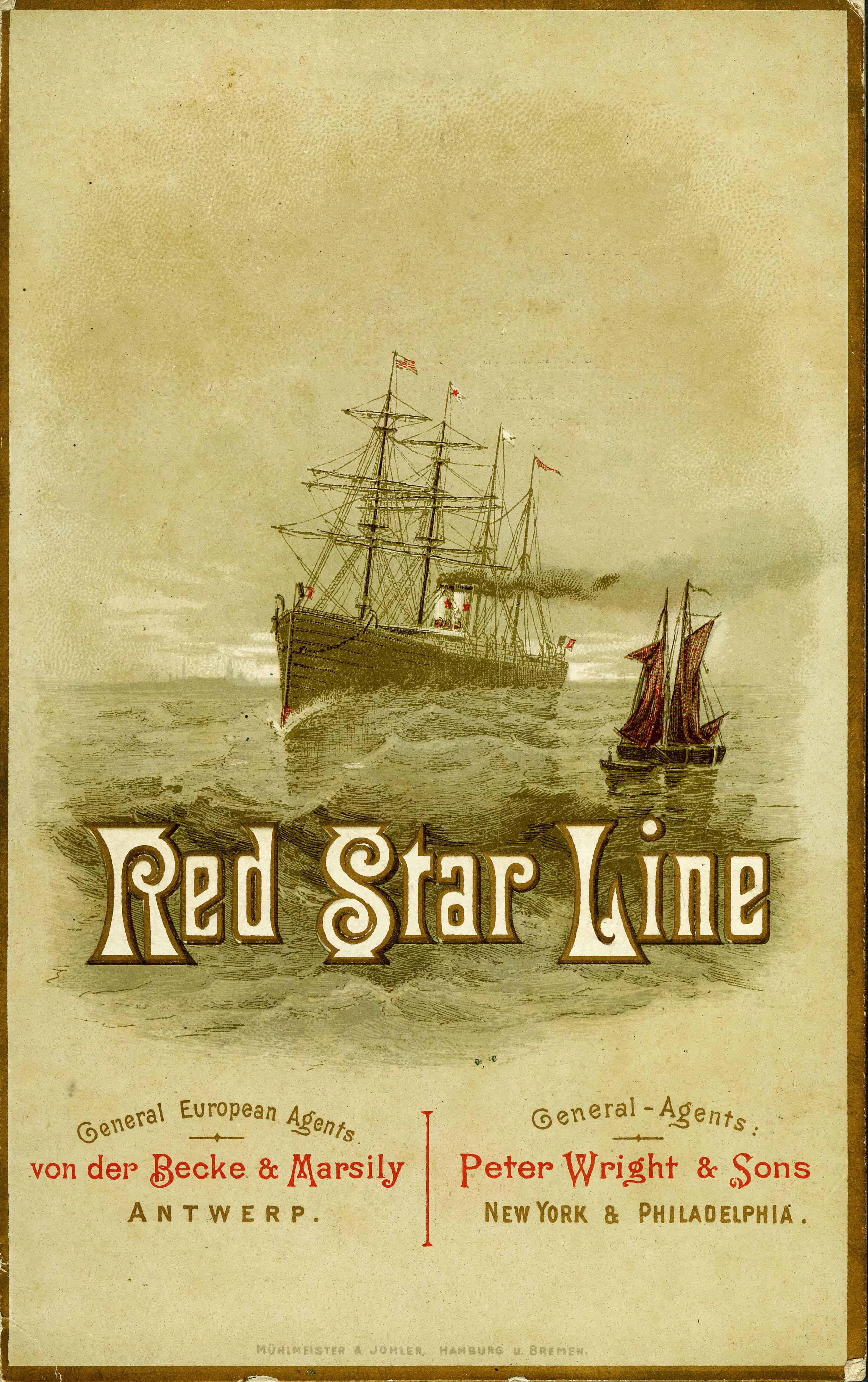 Founded in 1872, Red Star Line carried almost two million emigrants to the United States between 1873 and 1934; the vast majority from Germany and Eastern Europe.

Ship logs and interactive photographs of the Euterpe/Star of India emigrant ship from Maritime Museum of San Diego provide a glimpse into what life was like on board a migrant vessel.

Business papers, photographs, sailing lists, contract tickets and passenger information from the Black Ball Line, Anchor Line, Allan Line, White Star Line, Guion Line, Cunard and others are included, along with full size ship plans from important vessels such as the Lusitania, which can be navigated without losing sense of scale.

Incorporated by social reformer Graham Taylor in 1895, Chicago Commons was one of the original settlement houses serving immigrants in Chicago’s poor industrial district and is still active today.

Migration to New Worlds includes Series 7 of the Graham Taylor Papers, 1894-1944 from The Newberry Library. This series collects administrative and financial records, residential agreements, incorporation papers, scholarship fund information, correspondence, programmes and publications, reports and scrapbooks illuminating the lives and hardships of Italian, Eastern European and Asian migrants working in Chicago during the early twentieth century and the relief available for them through Chicago Commons.

In 1911 Thomas Sedgwick organised the migration of 50 boys from England to New Zealand on board the S.S. Authentic as part of an experiment to ascertain whether young British boys might help alleviate a shortage of farm labourers in New Zealand and offer a solution to the declining levels of employment opportunities in crowded British cities. Initially successful, Sedgwick soon expanded this scheme to Canada.

Chinese and Japanese Immigration in the United States 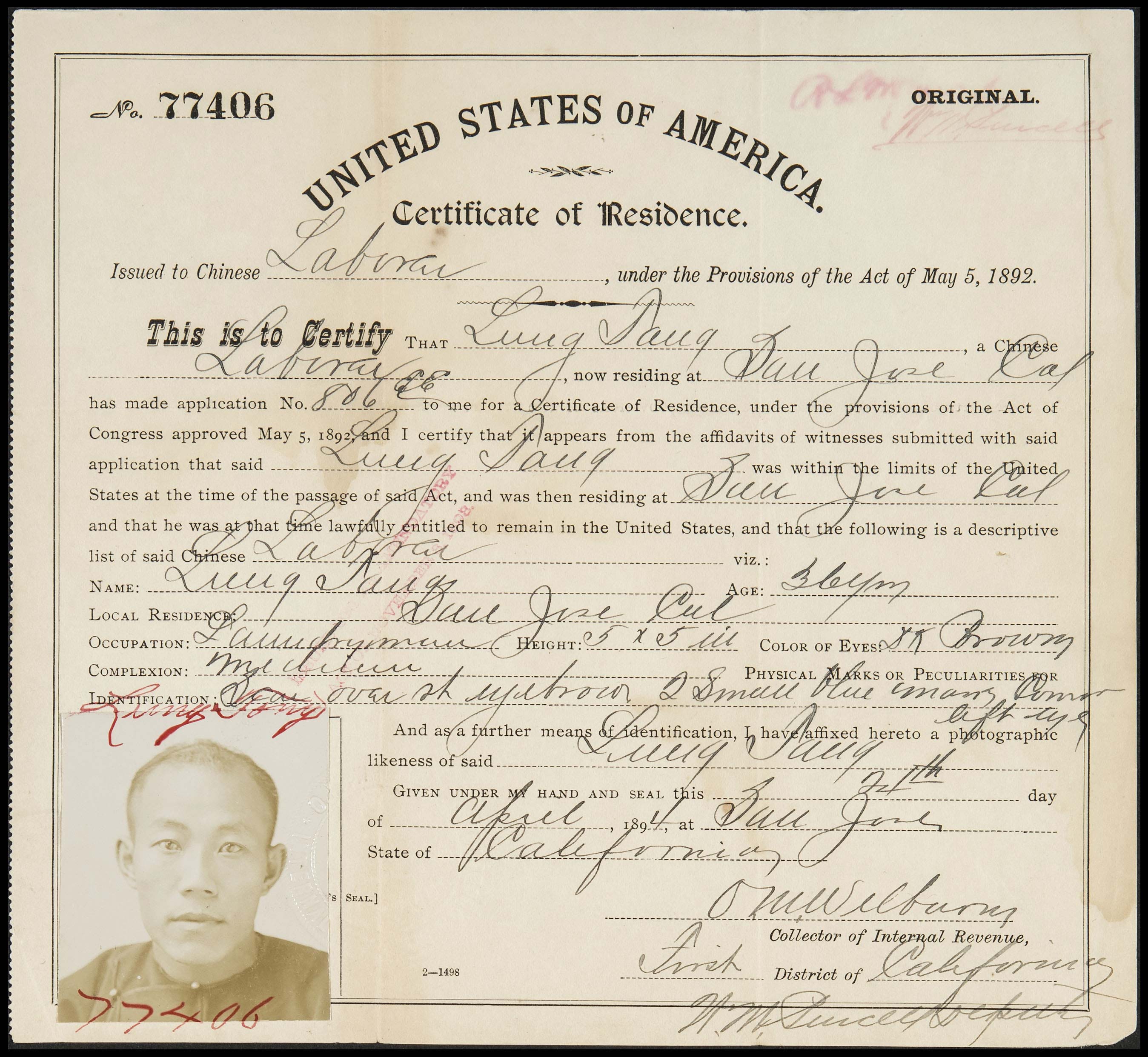 Principally concerned with Asian migration from the late nineteenth century; letters, diaries and printed pamphlets from California Historical Society reveal the tensions over Chinese and Japanese migration into the United States and the heated debates surrounding exclusion.

As an Inspector for the United States Immigration and Naturalisation Service in San Francisco, John A. Robinson's career was devoted to the arrest and deportation of illegal Chinese migrants through Angel Island and investigations into the white slave trade. His notebooks offer daily accounts and case notes on his attempts to deal with San Francisco’s prostitution problem, particularly within Chinatown.

The Shigezo and Sonoko Iwata Papers (1942-1991) from Historical Society Pennsylvania provide detail on the experiences of a family interned during the Second World War. Shigezo Iwata was born in Japan and immigrated to the United States in 1924, whilst Sonoko was born in Los Angeles. The collection contains letters between the Iwatas and their friends detailing life in the relocation centre and internment camps.

Immigration and Refugee Services of America

This collection brings together Interpreter Releases and organisational papers held at the Immigration History Research Center Archives, University of Minnesota.

Press releases appear in multiple languages, including German, Finnish, French, Armenian, Hungarian, Greek, Chinese and Arabic and deal with all aspects of the American refugee service from the Second World War onwards.

Founded in 1908 as a resource for all new immigrants arriving in Chicago, the Immigrants' Protective League assisted migrants in adjusting to American life. Social worker, philanthropist and Hull House resident, Grace Abbott worked as director until 1921. 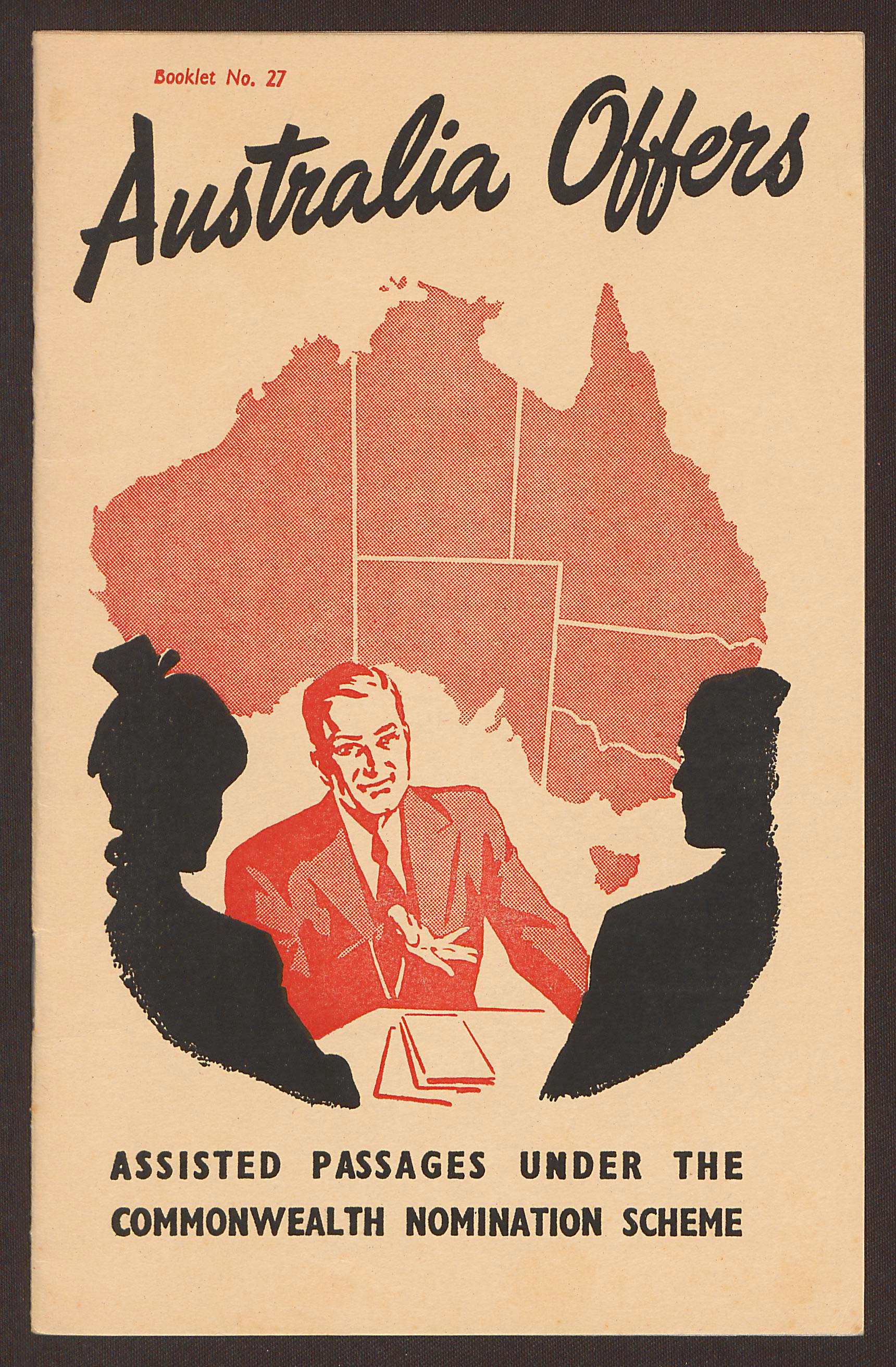 Australia during the late nineteenth century promised a new beginning and an escape from poverty. Letters and objects from Museums Victoria describe experiences in the gold fields, focus on the assistance offered to migrants from Britain and Ireland (see Caroline Chisholm Scrapbook) and chart the stories of families who came to Australia to start a new life.

Australian Government correspondence and reports (1914-1934) from the National Archives of Australia cover:

Pamphlets, booklets, government documents, organisational papers and information packs created specifically to encourage and settle families from Europe in Australia (c.1850-1970) from the University of Melbourne Archives provide a wealth of information on twentieth-century settlement. Highlights include reports of the Good Neighbour Council, information on the White Australia Policy and reports from the Australian Citizenship Convention.